The Freemax Twister kit is a rare breed. It’s a regulated variable wattage internal battery tube mod paired with a mesh-powered sub ohm tank. What makes it even rarer is the design it adopts. There is no solid color option, and all six come in some funky graffiti designs. With no black or stainless steel edition available (at least for now) it seems like Freemax decided to take a gamble with the Twister kit. Let’s see if it paid off and if the kit is a worthwhile purchase. 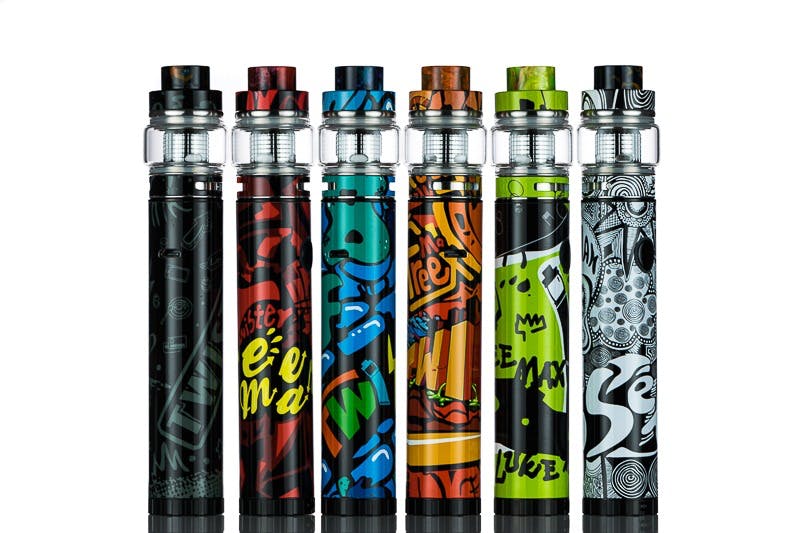 The kit feels like a solid metal construction and Freemax is calling the graffiti design a “color water transfer printing”. I have no idea what this is about, but the paint job feels like it’s going to last for a long time. There are six color options available at the moment, and the complexity of the design varies between them.

The simplest one is the “space black” Twister, which will probably be the choice of anyone trying to avoid attention. It is not solid black, but it’s close enough. The “black” one is more white than black and has a “Dia de Los Muertos” skull design, and the other four are colorful and bright – maybe a bit too bright. I hope Freemax releases solid colors in the future, as pairing each of the pieces of the kit with anything other than each other can be very challenging.

The mod is around 10 cm long and has a diameter of approximately 24 mm. It’s not a short mod, but given that it houses a chip as well as a 2300 mAh battery, it feels like it’s properly sized. The power button is large and clicky and the charge port is placed directly behind it. That’s good to know, as I had some difficulties tracking the mini-USB port on the white Twister (it looks like it’s part of the drawing). Last but not least, the dial on the bottom feels solid and provides a very satisfying clicky feedback every 5 watts. 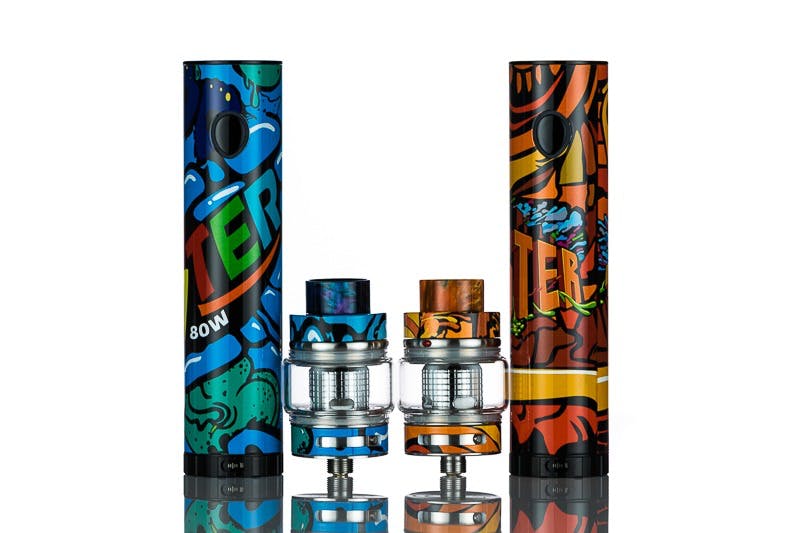 The tank also adopts the graphic design of the mod, which makes sense, as a solid color tank on top of a funky mod would feel a bit out of place.

There are O-rings on the drip tip, but it is also compatible with Goon-style 810s. The tank features an updated slide-filling mechanism, same as the Mesh Pro tank, with an interesting design to release air pressure when filling: the drip tip slides on top of an additional hole which releases the air, preventing leaking and flooding. It also adopts some of the looks of the Mesh Pro tank and comes with a bubble glass, making it a 5 mL tank instead of the 3 mL of the Fireluke Mesh. I love the extra capacity, but not the biggest fan of bubble glasses in tube style kits for obvious reasons — mine has fallen on my desk a couple of times already. Freemax includes a spare bubble glass though, which sweetens the deal a bit. 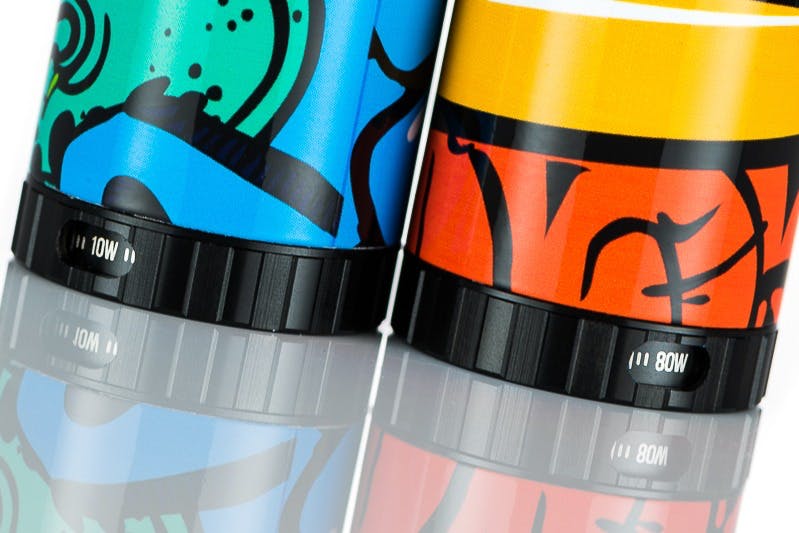 From a performance perspective, there is not much to discuss about the Twister mod. It feels very responsive, the wattages seem accurate and it fires rapidly, as most devices do nowadays. There’s nothing to complain about performance-wise; it works as a power mode regulated variable wattage tube should. In fact, the only topic I feel that I have to elaborate on is the battery.

The 2300 mAh battery of the Freemax Twister lasts for approximately two tanks on the 0.2 coil and a tad under one and a half tank on the 0.15 coil – tested both with the power set at 70 watts. Freemax claims 150 puffs per charge; there’s no way I am counting my puffs manually, and there are too many parameters for them to come out with a number that covers all usage scenarios. In any case, it sounds like a good estimation for using it with the included coils at the recommended wattage ranges.

The light is green between 100% and 65% and gets a yellow hue between 65% and 30%. The red light appears at 30%, and if you are using the mod with the Fireluke 2 tank you should find a charger at that point — a 30% charge at around 70 watts won’t get you too far. Expect a bit of an underwhelming vape for the last puffs as the battery approaches full depletion, but I found the vape to be consistent up to that point.

And here’s where it starts to get problematic. I timed the Twister’s charging, and it takes more than three hours to fully charge. That’s right, more than three hours! I actually had to repeat the whole process, because frankly, after two hours I forgot to check back. I don’t know why Freemax chose to not include quick-charging to the chipset, but it is a glaring omission in my opinion.

I think that the mod’s battery is the weakest point of the Freemax Twister kit. I wish it lasted a bit longer and I certainly wish it charged a lot faster. Thankfully it supports pass-thru charging, so you can vape while it’s plugged in. 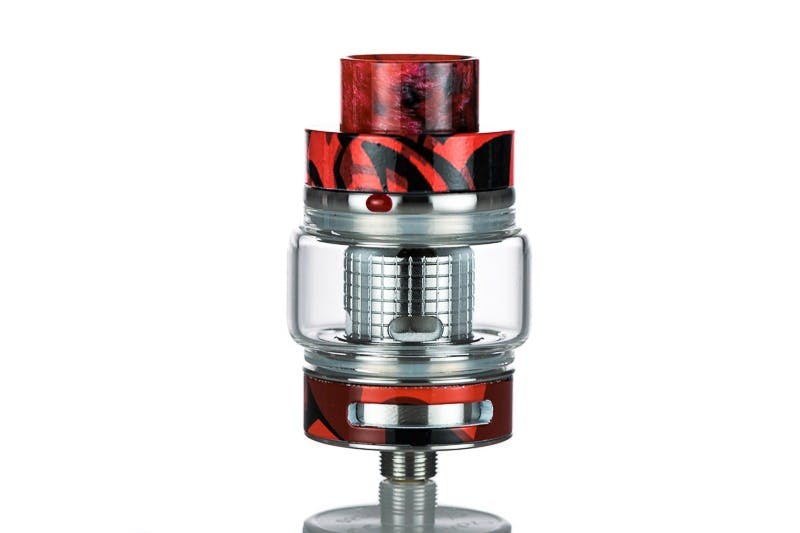 The Fireluke 2 tank is compatible with the original Fireluke coils:

The updated coils incorporate a wood pulp formula (90% flax cotton, 10% cotton), which is known to help with flavor and coil longevity. The coils are very flavorful indeed, and I only had minor leaking (a drop here and there) and no other inconveniences.

The airflow is a bit more restricted on the dual mesh coil, and I found it performed better with the airflow two-thirds of the way open at around 70 watts. I liked the single-mesh coil at around 75 watts with the airflow cut halfway. Out of the two, the dual-mesh is a clear winner for me. It has better flavor and a smoother vape across the board. But if you like a very airy draw you might prefer the single-mesh coil. I would have loved to have the X3 coil included, although it does require a bit more power than the other two and it might not be the best pair for the Twister from a battery life perspective. What I’d suggest is coming out with a coil that performs well around 40 watts — a coil in the 0.3-0.5 ohm range would make much more sense in a kit like this.

As for coil life, I really tried to burn them down but they are both going strong after ten refills or so each. Your mileage may vary, and I am using relatively clear juice, but these coils will last more than average — especially if you prime them properly before use.

The Freemax Twister is an excellent performer with some glaring flaws. On the one hand, I love the form factor and the fact that it comes with a variable wattage tube mod. It is very easy to use, and I enjoyed using the dial to adjust wattage. On top of that, the Fireluke 2 is one of the best sub ohm tanks around and its coils are excellent both for flavor and vapor production.

On the other hand, you have its battery. The capacity is lackluster and it doesn’t support quick-charging. I’d also speak of the colorful designs, but that’s obviously subjective; you either like graffiti on your mod or you don’t.

Do I recommend it? I do, but only if you are planning on using it as a backup vape, or if you are planning on using it mainly at home (or at least near a power outlet). Another option is to do what I am doing: I am using my black Twister mod with an MTL tank and the Fireluke 2 on a dual-18650 mod. This way, I am getting the best out of both of them.